Originating in the highlands of Scotland, Highland Cattle are recorded there as early as the ninth century. This extremely hardy breed evolved under harsh conditions — very short summers and sparse grasses growing with gorse and heather amid a cold, wet climate. The extremely harsh conditions created a process of natural selection, where only the fittest and most adaptable animals survived to carry on the breed.

At first, people classified these cattle by origin and color. The Kyloe was black and slightly smaller, and came from the islands off the west coast of northern Scotland. The cattle from the Highlands were larger for the most part, and primarily reddish in color. Now, both bypes are considered one breed. Besides red and black, Highland cattle may be yellow, white, and dun.

The first recorded importation into the United States occurred in the late 1890s when western cattlemen recognized the need to improve the hardiness of their herds.

Highland Cattle are easy keepers. Their ability to forage means they can thrive in poor grazing conditions. They also mature more slowly, which means that they can hold their condition for longer in poor conditions than many other breeds of cattle. They will survive where other breeds struggle. But at Flathead Farms, Highland cattle don’t need to ”survive.”

They are fed on natural grasses and hay, and also provided with a mix of vitamins, salt and molasses that ensures healthy growth for cattle feeding on hay. Their large horns, on both females and males, ensure that they will have plenty of personal space. 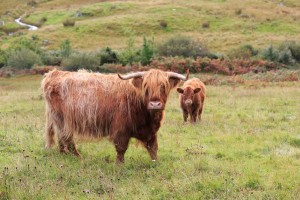 Highland cows are protective mothers that guard against predators, however, they are a docile breed. In the photo, a cow watches the photographer, on the alert for anything that might affect her calf. Note the heavy winter coats on both animals. The two layers of hair (an under down and a long overcoat) will keep them warm in Montana’s winters.

No animal at Flathead Farms receives artificial growth hormones or stimulants, and all calves are vaccinated and wormed according to QHB standards when weaned.

This hardy and vigorous breed’s long hair coat replaces the thick layer of fat found on most other breeds. The double hair coat allows the animal to marble naturally on low input forage while producing lean, low fat, high quality cuts of beef.

When you add up the score card between grass-fed and grain-fed beef, grass-fed beef wins hands down. The more naturally raised meat has:

Like all beef, grass-fed / finished beef is an excellent source of high-quality protein, iron, zinc, selenium, phosphorous, and the B-complex vitamins. But it is superior to grain-fed beef in a number of key ways. It is lower in fat and calories and higher in omega-3 fatty acids and CLA.

Fresh pasture offers hundreds of times more of these nutrients than a standard feedlot diet. As a result, grass-fed meat has up to four times more beta-carotene than conventional feedlot meat. Given all these benefits, a steak from a cow raised on pasture is even healthier for you than a chicken breast – the meat that health authorities are so quick to recommend. The steak has about the same amount of total fat, making it an equally good choice for a heart-healthy diet, but it has more omega-3s. What’s more it has less cholesterol than chicken and more than four times more CLA. Move over chicken. Make room for grass-fed beef!*

*Excerpts from the book “Pasture Perfect: The Far-Reaching Benefits of Choosing Meat, Eggs, and Dairy Products from Grass-Fed Animals” by Jo Robinson.